We were a bit weary ahead of our trip to Norway, knowing that we had a full schedule of planes, trains, buses and boats packed into five days with two kids that we would have to motivate to keep up. What young girls wouldn’t want to visit Norway, the land that inspired Arendelle the mythical country featured in Frozen? Ours.

Goofy faces on the fjord cruise

END_OF_DOCUMENT_TOKEN_TO_BE_REPLACED

We casually mentioned to friends and family back in the states last November that we were heading to Ireland in March for the kids’ spring break. Within a few days, three people had booked flights to meet us there. Turns out, most of the people we know in America are part Leprechaun and have been waiting for an excuse to visit their motherland and gather more lucky charms. We wanted to explore the Atlantic coast and were able to find a great house to rent that fit all of us on Dingle Peninsula.

END_OF_DOCUMENT_TOKEN_TO_BE_REPLACED

“I can’t wait to go to Hamsterdam!” our four-year-old exclaimed shortly after we booked our late-March weekend trip.  And while a city full of giant, fuzzy rodents driving clear plastic balls to work or walking around town through colorful tubes sounded awesome, we had to break the news to her that Amsterdam did not have an “H” at the beginning of it. But (almost as cool?) there were going to be tulips. Millions of tulips, maybe gazillions. Tulips in every color: blooming here, blooming there, blooming like they just don’t care!

Miffy the Dutch bunny greets you all over Amsterdam. She’s almost a hamster, ja?

END_OF_DOCUMENT_TOKEN_TO_BE_REPLACED

“What is that yellow circle emoji in my weather app next Friday?”  Barry wondered out loud as he scanned the ten day forecast for potential places to do a weekend trip.  “The sun.” Jana replied.  That’s right, a sunny day was being forecast for a weekend in February in Bellinzona, Switzerland.  Within an hour, plans were finalized for a quick trip down into the Italian-speaking, and slightly warmer, region of Switzerland. Unfortunately, the next day that forecasted yellow circle emoji was replaced with a cloud.  We went anyway–there are palm trees there, how cold could it be?

END_OF_DOCUMENT_TOKEN_TO_BE_REPLACED

Grindelwald is a mountain ski town in the Swiss Alps, not to be confused with the dark wizard of the same name from Harry Potter. At just under four months since our last trek up past Interlaken, we were (well at least Mürren-snob Barry was) having majestic-mountain withdrawals and Grindelwald seemed the perfect place to entertain our family visiting from the States the week after Christmas. END_OF_DOCUMENT_TOKEN_TO_BE_REPLACED

Imagine a well-preserved medieval village on the borders of France, Germany and Switzerland that transforms each December into a Christmas wonderland with such fanfare you’d think Clark Griswold did the decorating. This is Colmar, and to jump-start our Christmas spirit we spent the first weekend of December here, and it turns out we weren’t the only ones wanting mulled wine and macaroons. END_OF_DOCUMENT_TOKEN_TO_BE_REPLACED

A wave of horror washed over me as I glanced across the aisle of the airplane I had just sat down in and noticed my aisle mate had crazy eyes.  OK, the person was a four year-old girl sitting, unattended, with her shady older sister, but she had crazy eyes, nonetheless.  The crazy eyes were accompanied by a howl and kicking legs as she and her sister rejoiced over their bags of airplane-shaped gummies the flight attendant had just handed them.  With this level of crazy before the cabin door was shut, I was sure she would either barf all those colorful gummies up mid-flight or charge the cockpit in a sugar-fueled hysteria.  A second wave of horror hit me as I remembered I was responsible for both of them, was outnumbered, and this was probably going to be a LONG flight. 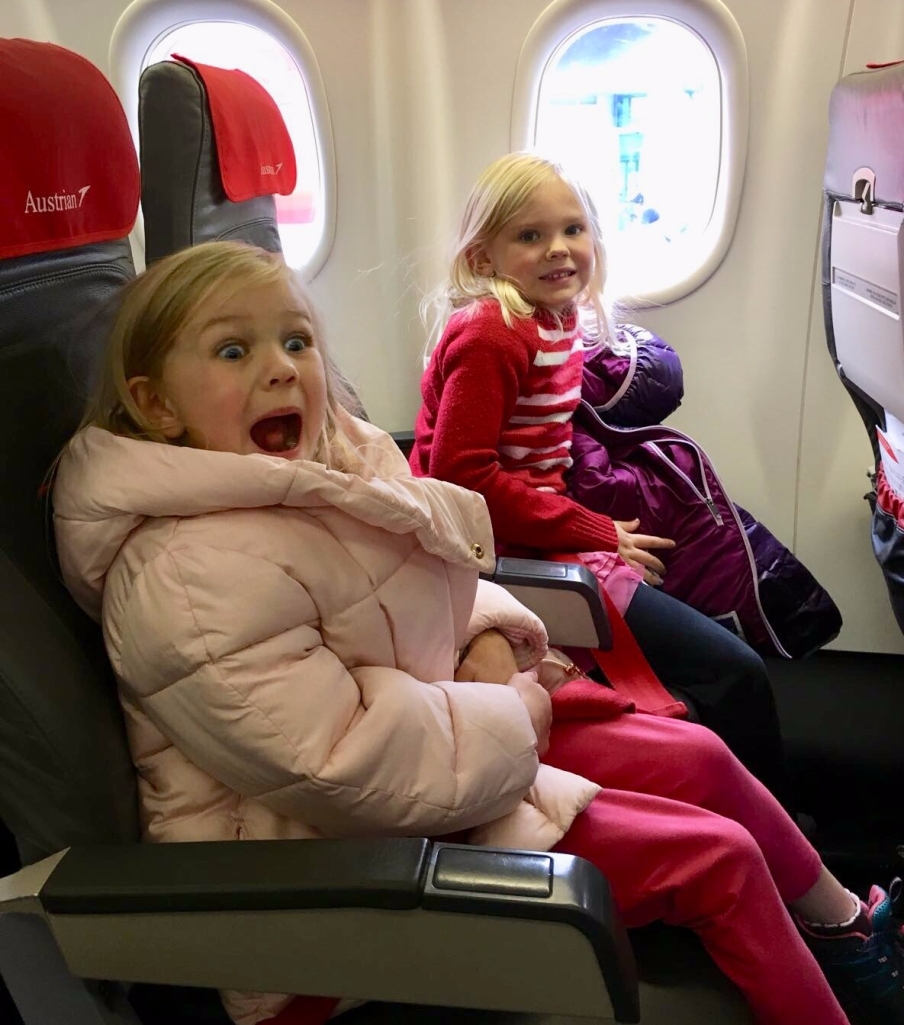 “No ma’am, I have no idea whose kids these are”